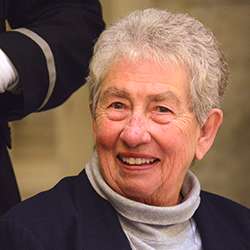 Sally was born in Madison, Wisconsin, in 1929 to a close-knit, fun-loving family. Her mother was a nurse, her father a hardworking woodsman who also helped build highways, and she had two older brothers. Sally learned to hunt and fish at a young age, and the self-sufficient family once traveled by canoe to Canada and lived there for three months.

Sally’s father kept an old woodstove outdoors and would cook pancakes for the neighbor kids every Saturday morning.

She married her late husband, Dean Doell, a wildlife biologist, with whom she spent many years living in wilderness areas when he worked for the US Forest Service. They had a daughter and a son. Tori and Chad, and eventually settled in Boise, ID. After Dean passed away at the age of 46, Sally remained in Boise with her children.

Sally is a swimmer and shoots her slingshot now instead of guns. She is an accomplished artist, with work in private homes around the country. Her preferred medium is watercolor painting with coffee.

Because of his declining health toward the end of his life, Sally became Art’s fulltime caregiver, making a point to get out of the house occasionally to eat out, spend time in nature, and fly kites together. Art passed away on June 14, 2017. The USMC held a fitting memorial service for him at the Idaho State Veterans Cemetery.