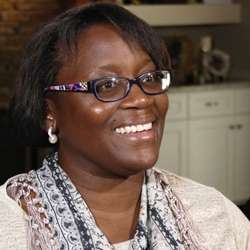 Precious was born in Jacksonville, Florida. She is the oldest of three siblings and was raised in Atlanta, Georgia. She met her husband, Leonard, in 1998 and they were married November 11, 2001. Leonard joined the United States Army in 1995 and served 17 years as a combat medic. He served in Desert Storm and Operation Enduring Freedom. He incurred physical and mental injuries and in 2013 was medically retired.

During Leonard’s deployment to Afghanistan, Precious assumed the role of “military wife” for the first time of their eighteen years of marriage. She became a regular visitor at the local Army post to become educated on what it meant to be a family member of a deployed soldier. When Leonard returned from the war in Afghanistan in 2010, he was injured, and was reassigned from his regular unit to the Warrior Transition Unit. This instantly changed their lives forever. Precious eventually resigned from ten years as an educator to become Leonard’s full-time caregiver.

Among her other publications, her blog, War Changes Lives: A Military Caregiver’s Journey, serves to share resources that have been helpful to her and her husband during this journey. Her hope is that her blog will serve as a tool to exchange experiences and ideas with others. Presently she is completing a Doctor of Education program that is 100% online, and she believes that distance education will play an increasingly vital role in educating and training military caregivers.

In her spare time, Precious reads, journals, and strives to include self-care in her daily routine. She and her husband find great inspiration in helping military families find solace through mentorship and other activities.