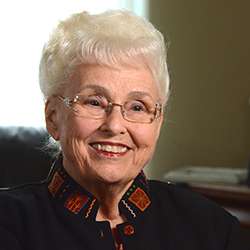 Gloria was born in 1933 in Santa Clara, California, at the home of her paternal grandparents on their 60-acre orchard. She was the only child of James S. Silva and Anna Cardenas Silva. Her parents moved into San Jose, California, in 1935.

While attending San Jose State College, Gloria worked for the San Jose Recreation Department as a Rhythms Specialist and the YWCA as a Junior Counselor in their teen club, The Hi Spot. It was at the Hi Spot where she met a young sailor, Ron Jabaut, on leave and on his way home to New Jersey, November 1950.

In September of 1951, Ron Jabaut and Gloria were married in Honolulu, Hawaii. While he was aboard the USS Silverstein as a Sonarman First Class, Gloria worked as a Kindergarten teacher at Leilha School in Alleva Heights where she also became the Rhythms and Dance Specialist for the entire school. Her husband departed for his second tour of duty to Korea in October 1951 at the height of the Korean War, and she remained on the island taking a short leave home over the ensuing holidays.

In June 1952 her husband returned to Honolulu. Gloria traveled home to San Jose in October to wait for his arrival and his discharge from the service. During the ensuing years, she taught Kindergarten in between giving birth to six children. In 1975, she was recruited by Camp Fire Boys and Girls to be a Program Director, and ultimately retired in 2000 as the Executive Director of the Santa Clara Counties Council of Camp Fire Boys and Girls. The couple then moved to Red Bluff, California.

In retirement, Gloria has volunteered on the Child Care Advisory Committee for the Tehama County School District, as the Commissioner for Red Bluff City Recreation Department, on the Housing Advisory committee San Jose, California, and as an ESL assistant teacher in the Sacred Heart Community. They returned to San Jose in 2003 and she became an independent consultant for non-profit agencies, mainly targeting start-up agencies.

Ron, who became the founder of The Remembrance Memorial for California Korean War Veterans in the San Joaquin National Cemetery, passed away in 2013. His death was attributed to the injuries he received while serving in the Korean War.

Gloria states, “I am honored to be part of the documentary, I MARRIED THE WAR. I only hope my experiences as a ‘war wife’ can give some counsel and strength to young women of today whose husbands are returning from the war zones.”

Gloria passed away unexpectedly at the age of 86 on October 3, 2019. As stated in her obituary, she “leaves behind a legacy of family, hope, and love.” We will miss her, and remember her always.