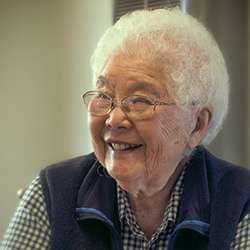 Anne Ohki was born in Sonoma County, California, in 1924, near the Russian River. She and her family were interned in Granada Relocation Center in Colorado at the beginning of World War II. Anne was later released from the camp to attend nursing school in Montana.

Anne’s future husband, Edwin, was also interned at Granada, volunteered for the US Army, and become part of the famed 442nd Regimental Combat Team along with his brother, Arnold. Ed was badly injured in Italy, and his brother died there. After the war ended, Anne and Ed met, married, and owned a dairy farm. They eventually moved back to the land of Anne’s upbringing, where they raised their daughter, Judy, and Anne pursued her nursing career. Ed passed away in 1996.

Anne remains active in her community, and enjoys visits with her daughter and granddaughters.