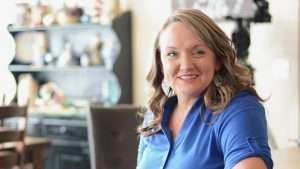 People who have seen I Married the War tell us how they come to really care about each one of the 11 forthright women in the film.

This warms my heart, yet deep inside, I think, “And, if only you knew their whole story!” It’s a well-known fact that documentary filmmakers must select from hours of interviews only the relevant footage they have time for in a 90-minute piece. It’s a painful process, because there is so much more we’d like to tell.

Such is the case with Carman Hinson. Another piece of her story is that she watched as her husband, Courtney, suffered physical and mental injuries from his service, and the Air Force had no interest in helping him heal and carry on as a leader of men…the work he was born for. He loved his troops, and they loved him. And after years of faithful service, he was discharged when he sought help.

This devoted wife saw how demoralizing and painful this was, and decided to take action. She couldn’t stand by and watch what happened to her husband without doing something to prevent it from happening to others.

While at an Air Force Wounded Warrior event, Carman started asking questions and had the opportunity to meet and share her husband’s story with then Air Force Chief of Staff General Goldfein. The general recognized there were missing links in care and help for the combat wounded boots-on-the-ground, and personally invited Carman and Courtney to be a part of a panel at the Pentagon in February 2016. Along with five other couples, they shared firsthand accounts, concerns, and stories with many key Air Force leaders and generals in order to advocate for and initiate change.

Imagine the courage it took to go up against tradition and history in a room full of top brass! But as a result, the Invisible Wounds Initiative was launched in October 2021 through the Air Force Wounded Warrior Program.

One person took action, and look what happened. This shows the spirit within the wives in I Married the War, and gives a glimpse into their passion for helping their loved ones, others in the same situation, and themselves. They make the world a better place.

Carman’s story about her experience at the Pentagon, and about finding resources that she said have saved her husband’s life, are inspiring. You can meet her and 3 other wives featured in the film by attending the upcoming Idaho Gala Reception and Premiere coming up on May 4 at the Riverside Hotel in Boise. Click here to purchase tickets (by donation).