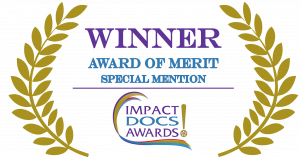 Award of Merit Special Mention in the Documentary Feature category

We feel that this award is especially earned by the women in the film who so bravely enlightened us about some of the lifelong costs of war, primarily how war affects our combat veterans. It comes home with the veterans, it changes them forever, and it impacts their families, their communities, and our nation. These 11 wives reveal their own personal challenges, resourcefulness, commitment, and love in the face of change and loss, including great loss in the case of one tragic suicide.

Sally Zepeda, Stacie Vaughan, Terri Topmiller, Anne Ohki, Laura Nickel, Francine Jones, Sally Jackson, Anne Jackson, Gloria Jabaut, Carman Hinson and Precious Goodson, please take a bow. You have stepped forward to raise awareness of today’s more than 5.5 million military and veteran caregivers, and honored those who have come before. For this, we shall be eternally grateful.