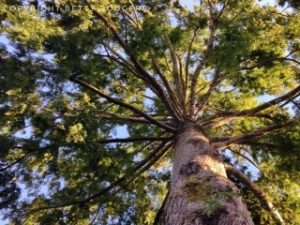 Last weekend, Ken, Associate Producer Carol Caldwell-Ewart, and I attended a gathering of long-time friends in northern California. We arrived, descending a few wooden steps to Penelope La Montagne’s abode overlooking the Russian River. She had carefully arranged fresh flowers, outdoor seating and place settings under a canopy of trees, and we found her standing at the grill where she skillfully transformed sausages and garden veggies into savory delights.

We relaxed in seats surrounding a low table laden with a cheese board, olives, bread and crackers, sipped on various beverages, and rose to greet other guests as they began to arrive. The conversation circled easily around catching up on everyone’s news, and gradually drifted toward an in-depth discussion about the recent Ken Burns series, The Vietnam War, which then evolved naturally into a discussion about our Vietnam War film, Bravo! Common Men, Uncommon Valor.

Then Penelope leaned forward, announced that dinner would be served shortly, but before that, she wanted Ken and me to tell everyone how they, as our friends, could best help with our current project, I Married the War. I have to confess, I was overwhelmed. It was a beautiful moment that floated gently above us like the glorious sunset that later graced the sky. And what do you say when friends offer their help?

We decided to be forthright and spoke about the progress we’ve made so far, and about the incredible women waiting to be interviewed, and about our editor waiting to begin his masterful work, and about Idaho Public Television wanting to broadcast the film. And then I said, “What we really need right now is personal connections to people or organizations who care about the struggles of wives and families of combat veterans, and who can help fund the rest of the film.”

Penelope’s next question was, “Okay, exactly how much do you need?” I responded and then explained that after a few generous grants and donations that have propelled us this far, we still need to cover the filming of the remaining interviews, the editing, the music, the sound remixing, color correction, and so on. And now, because they of the question, our dinner-circle of friends began thinking about whom they might know. I would never have told them what we needed had they not cared enough to ask.

And here’s the astounding part: We learned that at least two of the dinner guests in this small group of close friends had experienced violence or trauma at home because of their fathers’ PTSD and other residual effects of combat that had changed them forever. As we continue to learn how pervasive this issue is throughout our greater society, we are more certain than ever about the need to foster a national awareness about what happens after our warriors come home.

So now I feel I can ask you: Whom do you know who could help us fund part or all of I Married the War?