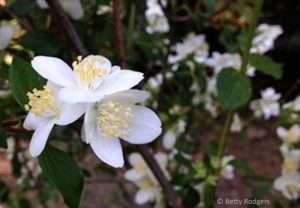 When choosing the name of our production company for I MARRIED THE WAR, and because this is a film about women, we wanted something feminine as well as personal. Since we live in Idaho, we are partial to the beautiful state flower, the Syringa.

The Syringa blossom exudes the heady scent of orange blossoms, and is often called a Mock Orange. The species was noted by Meriwether Lewis of Lewis & Clark fame, and it was named Philadelphus Lewisii after him. The woody shrub grows in the northwest, from northern California, to British Columbia and west to Montana. It usually stands out as a single plant among other species. Native American tribes used the Syringa for many purposes, and the blossom has been used to make teas and perfumes.

We like to think of the four petals as a representation of the women who are being interviewed from various regions of the US, from east to west, and north to south. The center of the blossom is the common experience they all share as the wives of combat veterans.

A big shout-out to our graphics guru, Mike Shipman, for the beautiful Syringa Cinema logo he designed for us.